The Stories in Pets in Space 7 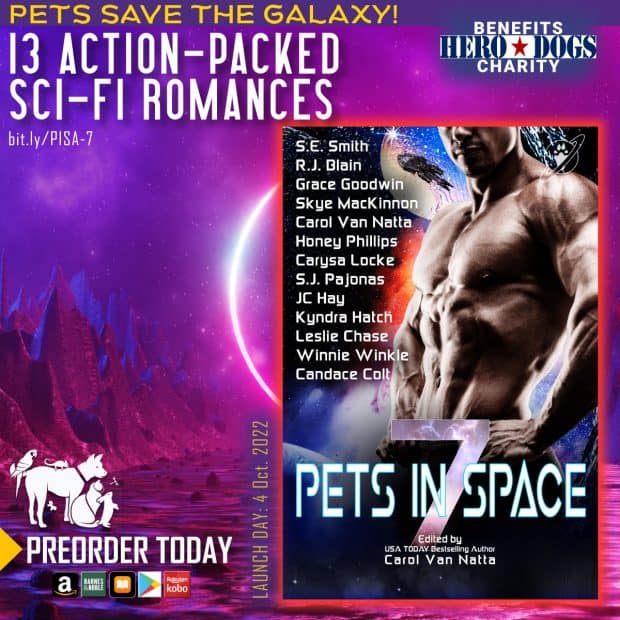 The Stories in Pets in Space 7

Travel the galaxy in an intelligent starship, a treasure hunter, a tech scavenger, and a science ship…

Treat yourself to fine dining, visit an alien archeological site, and browse the shelves of a space station’s only bookstore…

And, of course, meet the most lovable pets in the universe!

WYNTER AND THE STONE DRAGON
Series: Rings of Power (Book 1)
by S.E. Smith
When a doorway between worlds opens, a human king and an alien princess and her pet dragon discover love and danger.

LIFE-DEBT
by R.J. Blain
Hybrid human Viva and her pet fox have two rules: no names and no attachments. Why does the handsome man she rescued makes her want to break both?

MARKED MATE
Series: An Interstellar Brides Program Novella
by Grace Goodwin
An elite hunter pursues a dangerous criminal on an unsuspecting Earth, only to be distracted by a mysterious woman and her furry pet.

ALIEN ABDUCTION FOR UNICORNS
Series: The Intergalactic Guide to Humans
by Skye MacKinnon
A wily unicorn uses unconventional tactics to bring an alien male across the galaxy to meet his soul mate, a Scottish tour guide who doesn’t believe in either of them.

AN ENTANGLEMENT OF GRIFFINS
Series: Central Galactic Concordance
by Carol Van Natta
She gave up interstellar trading to start a shelter for genetically-engineered griffins. He’s a space pirate to handle trouble. To save the sanctuary, they’ll have to risk their freedom—and their hearts.

CYBORG RIDER
Series: Cyborgs on Mars
by Honey Phillips
When a scientist and a cyborg are trapped in a mysterious Martian cavern, their only hope of rescue is a curious bioengineered mole named Eglantine.

HEALER HEART
Series: Telepathic Space Pirates
by Carysa Locke
Trained telepathic killer Sevan fears nothing except his own feelings for telekinetic healer Nayla, who is determined to save him. Can they and intelligent cat Rasalas save a generation of children from certain death?

MYRA’S BIG MISTAKE
Series: The Kimura Sisters
by S. J. Pajonas
She feels like a failure. He’s wanted her forever. Will her scandalous black-and-white striped pet lead them to their hearts’ desires?

DESERT FLAME
by JC Hay
Dr. Cerridwen Lewis is prickly, foul mouthed, and quick to anger; in other words, she’s everything Captain Kal and his pet scythewing ever wanted.

DEATH ANGEL
Series: After The Fall
by Kyndra Hatch
How do you choose between your people and your mate? Especially when you’re a Korthan cyborg captain and your human mate unknowingly holds the key to lasting peace or unending war?

WRITTEN IN THE STARS
by Leslie Chase
Megan isn’t looking for love, especially not from an alien mercenary just passing through. But love, and her winged cat Nebula, have other plans.

LIQUID COURAGE
by Winnie Winkle
Powerful sea witch Morgan is determined to save her beloved ocean creatures from thieving aliens. Tony offers to help, but he’s got secrets.

RHEA’S CONUNDRUM: A WITCH IN SPACE
Series: Baga Shores Romance
by Candace Colt
Eccentric witch Rhea only dreamed of the stars. So how did she and her snarky cat end up in a junk-picker spaceship with sexy alien captain C’tloc?