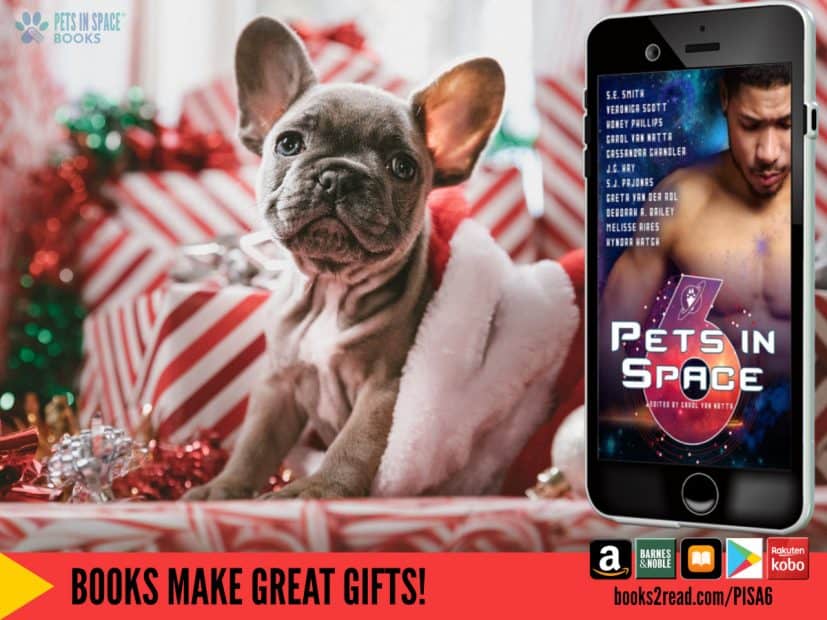 We just made the donation to Hero Dogs. Thanks to your purchases of Pets in Space 6, we’ve now contributed more than $6,500 to Hero Dogs in the last six years. You all are the best!

Reading an anthology is like going to a buffet—you can always find several things you like. That’s why anthologies make such great gifts. Plus, since it’s an ebook, it’s a fabulous last-minute gift. There’s no need to wrap anything or wait in line at the post office. Just choose your favorite bookseller, click that “Gift” button, and you’re the Best Gift-Giver Ever! 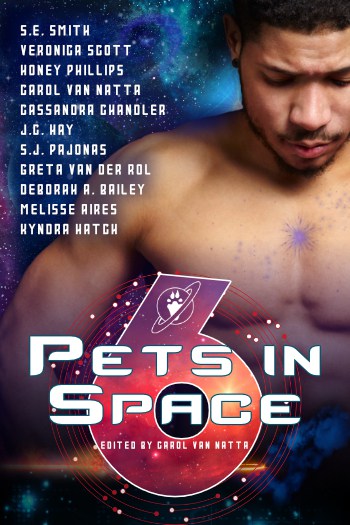 BEHR’S REBEL
Marastin Dow Book 2
by S.E. Smith
With the help of her two innovative pets, a human woman rescues an alien General and becomes part of the revolution he is leading.

STAR CRUISE: TIME LOOP
Sectors Romance series
by Veronica Scott
Reliving the same terrible day, Raelyn and her pet are in a race to save the interstellar cruise ship…

THE CYBORG WITH NO NAME
by Honey Phillips
Can a rogue robotic horse and a misfit mechanical dog protect a wounded cyborg and a lonely scientist from a vicious new enemy?

ESCAPE FROM NOVA NINE
A Central Galactic Concordance Novella
by Carol Van Natta
She’s a space pirate with vital information. He’s a wanted fugitive with enemies hot on his afterburner. Will their unexpected attraction survive escaping a dangerous asteroid mine in time to avert a war?

TRADE SECRETS
The Department of Homeworld Security series
by Cassandra Chandler
She wanted to learn about aliens—and ended up uncovering their secrets!

SEE HOW THEY RUN
TriSystems: Smugglers
by JC Hay
Love blossoms in space, but can it survive being dragged back down to ground?

SURI’S SURE THING
Kimura Sisters Series
by S.J. Pajonas
In this best-friends-to-lover romance, workaholic Suri would rather be in space than deal with her ex-boyfriend. Will she be able to leave him behind and find love with her best friend instead?

THE THUNDER EGG
by Greta van der Rol
Can a freighter captain and an academic outwit their pursuers and get a little alien foundling back where she belongs?

WORLDS OF FIRE: METAMORPHOSIS
by Deborah A. Bailey
When an alchemy student is deceived into using her transmutation skills to assist a smuggling ring, will her gargoyle shifter mentor help her expose the criminals or turn her in?

STRANDED ON GRZBT
by Melisse Aires
Can a resourceful human trust the alien determined to help her and her companions?

ESCAPING KORTH
Before The Fall series
by Kyndra Hatch
An alien interrogator recognizes the human prisoner as his fated mate, leading to danger for both of them.